In the last post we looked at the Plan, in this post we are going to take a look at our Design. We worked with a partner that we gave our requirements on compute and RAM and they came up with the design. 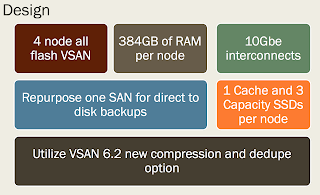 We ended up with a 4 node Lenovo x3650 M5 cluster each with Intel Xeon E5-2650V4 Processors and 384GB of RAM. The disk groups initially were 1 x 400GB cache disk and 3 x 1.6TB Capacity disks to meet our need of around 10TB of raw data,
we ended up expanding that before the project deployment was finished, but more on that in a later post. One of the things we really wanted to take advantage of in VSAN was the new for version 6.2 feature of Dedupe/Compression. We were looking forward to the increased rack space and lower power requirements from this consolidated approach as well. Remember from the planning phase that we had a very large Bladecenter and 2 separate multi shelf SAN systems that this would replace.We also as part of the design wanted to repurpose a newer v3700 SAN array that had been previously a part of our production VMware environment for direct to disk backups and get away from the slow process of backing up directly to tape

All flash VSAN requires 10GBe interconnects (hybrid VSAN can still use 1Gbe) so we went with 2 Cisco 3850 12 SFP+ port switches for redundancy. Looking at the Diagram below shows our network wiring topology 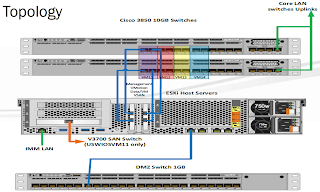 As you can see we chose 2 switches and 2 PCIe cards for a double failover configuration, meaning we could tolerate either a switch or a PCIe card failure and still be fully functional. We isolated our VSAN and vMotion traffic to the VSAN 10GBe stack only, with Multicast traffic being a requirement on VSAN 6.2 (VSAN 6.6 now removes this requirement and uses Unicast) we wanted to make sure that the VSAN switch stack didn't affect our other edge switches, we were told the multicast traffic on VSAN can be very chatty and could cause problems on other parts of the network. We allowed only Management traffic and VM traffic out to the core via the Fiber uplinks. We also added a separate VSS to our design for our DMZ traffic zone. Stay tuned for the next post in this multipart series where we will go over the implementation of VSAN. Thanks for reading! Cheers!