This will be part 1 of a multi part series on how I deployed VSAN, This is content taken from presentations I have done at several VMUG quarterly meetings and USERCONS over the last 6 months.

In this installment we will take a look at the Project Planning phase.

Our original plan didn't include VSAN at all. It in fact started out as a conversation between us and our vendor on a request to quote out 3 new blades for our existing IBM Bladecenter. We knew that we had some upcoming applications that were going to require compute and RAM be added to the cluster. The word that we got back was that the bladecenter was EOL soon and it didnt make much sense to invest any more in that platform. So we were looking at migrating back to rack mount servers. We had done a POC with a leading all flash storage array that had promised some good dedupe and compression ratio's that didn't pan out (we had lots of art files that didn't compress very well).


I had seen early presentations on VSAN when it was first released and was impressed with its capabilities way back in 2013, and while out at VMworld 2016 last summer, after talking with several VMware reps concluded that it might be worth a look. I liked its baked into vsphere ease of use and patch upgrade cycles being no different than a normal esxi host patch cycle. We had a series of meetings with VMware reps in person and over the phone as well as meetings with our vendor discussing the possibility of going with VSAN.

So lets recap some of the reasons we looked at VSAN 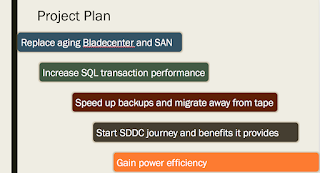 In addition to the aforementioned reasons we also wanted to increase SQL transaction performance for an application that we had some challenges with using the SSD's of an All Flash VSAN. We were also interested in gaining rack space back with the compactness of a Host node only configuration and the power benefits that go with it. I also liked the Software defined data center vision that VMware has for all of its products to tie together. I am looking at a possible NSX deployment in the future and VSAN was a natural first step.

In the next installment we will take a look the design phase and the hardware specs we came up with for the deployment. Thanks for reading!
Posted by Tony at 7:53 PM