My home lab has gone through so many different variations through the years, as my needs at work have grown and changed my home lab has changed with it. I have constantly tried out new products just because I am a tinkerer and love playing around with new software and love the hunt for new parts as well. I have spent countless hours on eBay, forums and websites researching that next item I need or that next product I want to try. This series will attempt to take you through the various iterations of my lab as it has changed over the years. I will focus on what worked, what didn't, troubles I have had, other blogs, websites that have helped me over the years and it might not be 100% technical either. There may be some reminiscing as well as I try to recall the various configurations it has gone through. I hope you enjoy this series and come along with me as I discuss the home lab. 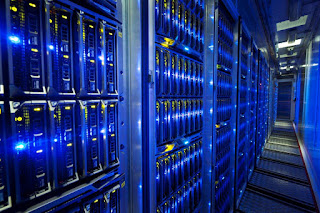 First, a little background, I have been building my own computers since 2001 when a friend encouraged me to give it a try. I had always been interested in computers and had been using them for quite a while at that point, the better part of a decade in 2001. While in High School I took every computer course I could, but I had never thought of building my own. This was to be my start tinkering with computer hardware. As my career grew, starting out on a help desk for a small ISP back in 2005, I was always intrigued by

hardware and software. I continued to build gaming computers and was always trying out new routers and networking equipment. This wasn't a full home lab by any means but really got my interest going in that direction. I transitioned to a job as a network services technician for a large corporate firm and got my first taste of real servers and networking in 2007. I was hooked at that point. I couldn't believe that I was getting paid to play around with servers and storage and loved it. I worked there for 7 years honing my skills, but in 2014 it was time to move on. I had really gotten into VMware back in 2008 and played with VMware Server, Player and workstation extensively and I decided that I really wanted to get certified and learn it much better. I was convinced that I wanted to do that for a living. I met Brian Kirsch from the Wisconsin VMUG and learned that he was an instructor at MATC and he was able to give information on enrolling in their Install, Configure, Manage course for vSphere 5.5. I got to studying for the course and realized that I wanted my first real server to play with to help me learn this stuff. I scoured eBay and purchased a Dell R610 1U rack server show below. I got what I could afford at the time which was a config with Dual Intel X5560 Processors 2x146GB 10k drives and 48GB of RAM. As you can see I purchased a wire shelf from Home Depot to hold it as I had no rack. 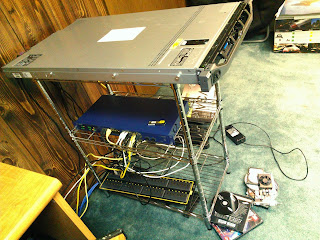 I studied hard and went through the course and final exam using that server. I took the test and got my VCP the summer of 2014 and the first thing I did was start looking for jobs with VMware in the description. Since then I have upgraded and added many things, but this was the beginning of my home lab. It was just the one host and a 24 port Netgear GS724Tv3 smart switch. It was a humble beginning but really helped me learn the concepts of the VMware vSphere software and how to run and manage a VMware environment. This also landed me my current job as a Network Administrator where I have learned so much and deployed many great VMware products like vSAN, and Horizon View. I hope you have enjoyed the intro to this series, we will jump into my first shared storage and other upgrades in the next installment! Thanks for reading!